My wife and I spent a week in a cabin on Lake Superior, as we do every year.  We divide our days between hiking and reading–or reading and sketching, in my case.  This time I took along a book about drawing with pencil and charcoal, so I was reading about sketching part of the time.  I also brought along some new drawing tools–in particular vine charcoal, which is just what the name implies: charcoal made from twigs.  I found that using it was exhilarating–the broad, soft tip made it responsive to the slightest movement of my hand, and encouraged me to work swiftly and to capture the mass of what I was drawing in a single gesture.  I am used to rather slowly building an image from innumerable lines, but this was more like using a paintbrush.  By employing an artist’s stump I could smear the charcoal to get different tones, almost like I was using ink wash or watercolors.

The sense of immediacy in my resulting sketches seemed palpable.  But how to explain this?  What did speed have to do with it?  And was the crudeness of the medium–I was literally drawing with a burnt stick–an asset?

I stumbled upon one explanation in a fascinating book by the pencil and watercolor artist David Rankin.  In Fast Sketching Techniques, Rankin tells how he had to learn the difference between a sketch and a drawing late in his career.  He was used to working from photographs, building meticulous works that earned him a great deal of acclaim.  But he began to spend summers in Kashmir, and found his studio skills were inadequate for capturing the new, strange country he was in: “I had the desire to sketch or paint some of the wonderful things I saw and experienced, but was shocked to realize that my existing skills, though substantial, were simply not the right ones for the job.”  In short, he was too slow.  Rankin concludes that the difference between a sketch and a drawing is the “speed at which they were drawn.”  This seems obvious, but  Here are his examples of a drawing, and of a sketch: 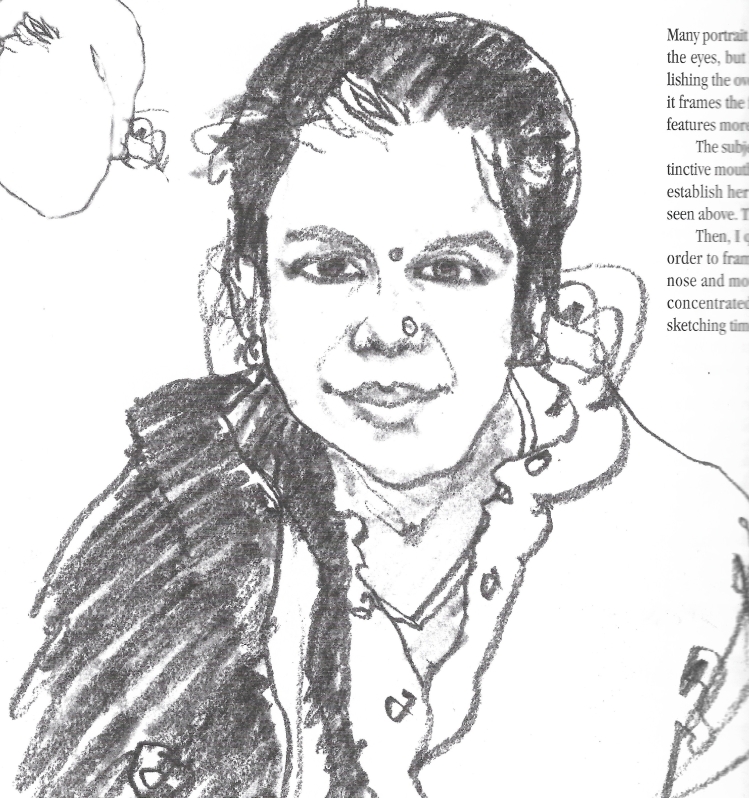 Clearly one image is much more refined and detailed–the drawing is an impressive bit of realism.  But the sketch is also impressive, for different reasons.  Rankin goes into this in more detail:

The whole purpose of sketching is different from drawing.  When you sketch from life, you’re simply trying to capture visual and emotional impressions of subjects.  You’re working fast.  Study the movements, the form,the postures and the intrinsic characteristics of a subject moment by moment.  You’re only trying to capture something of its essence in your sketch. . . . Sketches are the fastest and most creative thinking that you do with a subject.  They are intense, loose, rapid and spontaneous.  They don’t look like a slower, more deliberate drawing.

Rankin claims that this way of working exploits the difference between recognition and seeing:

. . . seeing isn’t enough.  In order to draw better, you have to be able to not just see an object, but to recognize its essential characteristics well enough to re-create its likeness on paper with only a pencil.  To sketch better you have to see and quickly recognize shapes, contours, basic features, details and relative values.  The amount of visual information we recognize in a mere glance is phenomenal.  The more alert and aware we are of these subtle momentary impressions in our minds the more we have to focus as we sketch. . . Recognition is more complex than seeing.  Recognition is a higher brain function that involves many other features of consciousness in fractions of a second.

This gets at a paradox that is at the core of what makes art work:  we never see the world, really.  We recognize it.  That is, any object we see is infinitely detailed and could be seen in an infinite number of ways.  Yet objects are recognizable.  There is a certain gestalt to them.  This is what makes it possible to “chunk” the complex stream of sense data into simplified but discrete images of what we call objects.  And it is only by using images that we can think about objects.  We never get the world as it is—we get sketches of it—vastly simplified diagrams.  As Spanish philosopher Jose Ortega y Gasset put it,

. . . there is nothing we can make an object of cognition, nothing can exist for us unless it becomes an image, a concept, an idea–unless, that is, it stops being what it is in order to become a shadow or an outline of itself.

This gives us a hint as to why sketches can be so compelling.  Rankin’s work provides an example: a complex drawing that took him many hours is an impressive representation; it is a much better description of the object.  But that faithful detail takes us away from recognition and attempts to convince us we are seeing the object.  What was present in the sketch was the moment of contact, which is diluted in the more elaborately worked drawing.  In fact, much of the “work” of a drawing is ridding the image of the traces of contact precisely by adding details which recognition would have overlooked.  The more detailed a drawing becomes, the more it tries to become a substitute for the object itself, which is of course impossible.  But detailed representations can be compelling–they provide a simulacrum which is in itself a stimulating object.  When we view, say, the Mona Lisa, we view a powerful object in its own right, not a representation of a Renaissance woman.  The woman is dead, or may never have existed, and this does not diminish our experience.  Nor do we imagine we are present at the moment of contact between da Vinci and some real person.  The painting has completely replaced its original referent.

What does a sketch give that a detailed rendering cannot—or, to put it another way, why are even crude sketches often more compelling than photographs?  The answer is that the sketch tells us openly that its depiction does not “describe” but rather invokes the object.  It respects the object’s autonomy by not attempting to replace it.  The sketch’s reduced information stands in for the irreducibility of objects.  Their sovereignty.   First the sketch causes us to recognize what is being observed, then it warns us away from any attempt at replacing the object with a simulacrum.

Furthermore, the sketch flatters the viewer because the viewer has more to infer—recognizing the content of a sketch often takes more work than seeing an elaborate drawing or photograph.  The viewer must both identify the subject and be willing to intuit the missing detail, or trust that there is more to be known than can be known.  This is why many amateur photographs are utterly lifeless–they seem to exhaust us with detail, yet there is no sense of depth in the representation.  We do recognize the objects in the photograph but we do not sense that there is complexity beneath them–the image gives us nothing to do.   Of course, this is true of bad sketches as well.  But in that case we are sure that the fault is in the rendering–the objects themselves are not tedious or awkward.   A sketch preserves the basic reality that any perception of an object creates a new hybrid object, composed of the perceiver and the perceived.  We never forget that the subject of a sketch is present to the artist, and vice-versa.

Here are some pages from my sketchbook, most of them focused on an old birch tree which stood outside the window of our cabin.  What I like about them is they seem to preserve the intensity of my encounters. 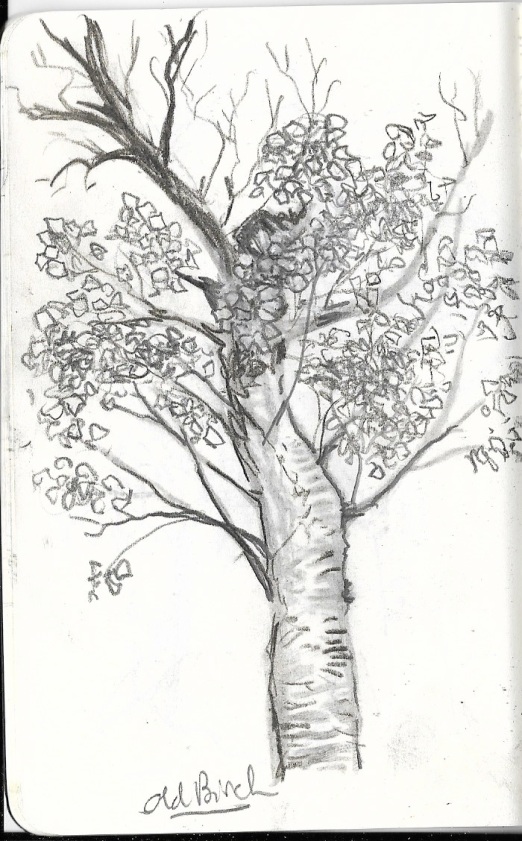 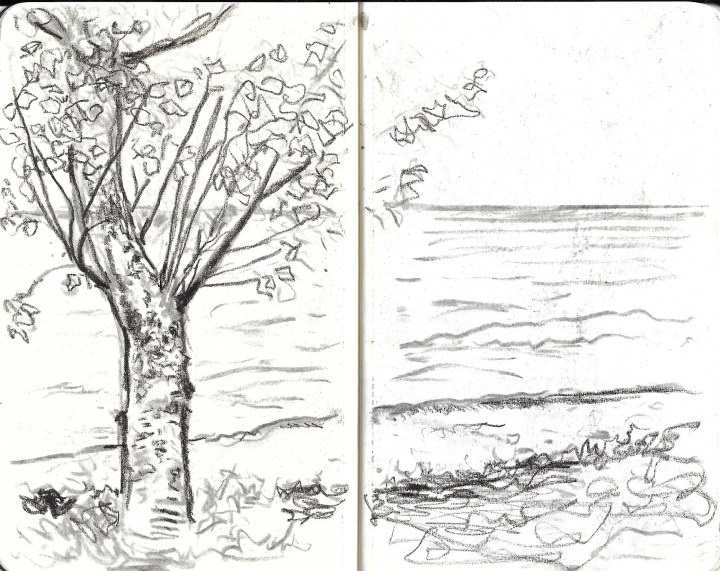 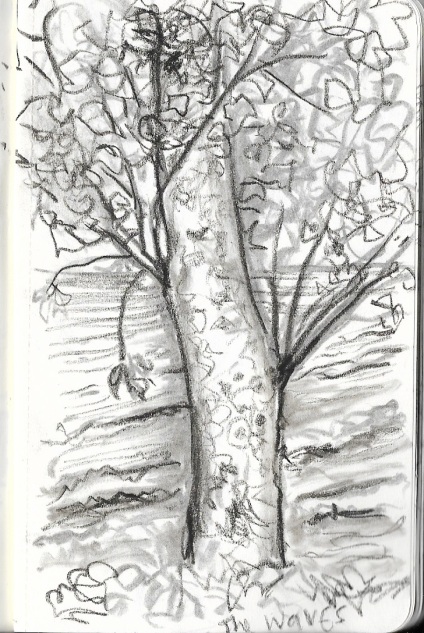 Here are a couple of “seascapes”:

I feel happy with these, because they remind me of the power of Lake Superior’s North Shore.  My sketches are not substitutes for the landscape, but they express the recognition I felt when I was in them.  I also remember how pleasurable these drawings were to make.  They seemed quick and effortless.

One thought on “Drawing with Sticks: What Sketching Shows Us About How We Experience the World”